Hands are Dry but still painting away

So, today I have for you one of the lovelies that the very dear Jen from nailpolishuk/bats about nailpolish sent me last month!

This one is surprisingly my absolute favorite of them all, I love the color and the application, even though what I had really been lemming was the BarryM Racing Green...I think that color will look better on my toes this summer than on my hands this winter. =/
This is 2 coats of Nail inc London in Monmouth Street..such a lovely pink that just glows even though these pics do not do it justice! 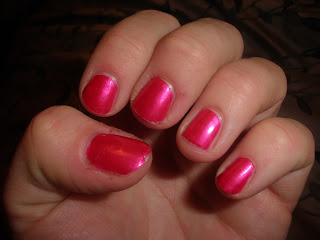 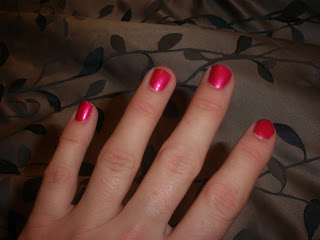 Funny thing about this polish too, I can usually get it done in one coat! it is superb as far as application goes! LOVE LOVE!
Posted by AggiePigeon at Thursday, January 06, 2011 7 comments:

And the Prodigal Daughter Returns...

So, my lovely followers, I have been MIA for a while as I am sure you have noticed. Excuses aside let's just say that I am getting back into the dating world again, 'nuff said!

I have my Christmas manicure for you today, even though I am much more of a Festivus-for-the-rest-of-us celebrator! On the upside of this manicure: I did it while at work and to make the dots on my thumb I used a mechanical pencil tip, so it is conveniently easy, albeit lazy.

What are everyone's plans for New Year's? Do you have some killer party to attend? Quiet evening in with the dog/cat?
Posted by AggiePigeon at Tuesday, December 28, 2010 5 comments:

Santa Lives in the UK and delivers to me early!

Good morning, it is dreary and rainy/snowy here where I live but inside when I got to work this morning there was a surprise in my inbox! 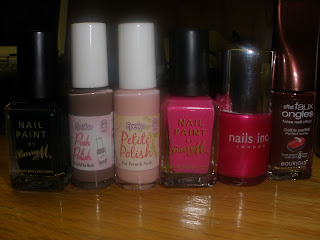 Jaljen from nailpolishuk/bats about nail polish sent me this awesome package, thank you so much Jenni, please let me send you something!...and three of them are long time lemmings and the other three are still very exciting and pretty in the bottle!
From left to right: BarryM Racing Green, Eyeko Posh Polish, Eyeko Petite Polish [these are the three I've really been lemming], BarryM Limited Edition something pink...the label is a little sketchy, lol, nails inc, London in Monmouth Street, and Burjois Brun enrobant. Which means Brown Coat, Brown Robe, Brown Wrap, Smelly Muskrat? I obviously don't speak Francais but  I'm still very excited for this polish!

Not to give these a short post but I have work to do right now, I will definitely try to swatch these tonight though, if I can get lighting to be good. On to dog pics... 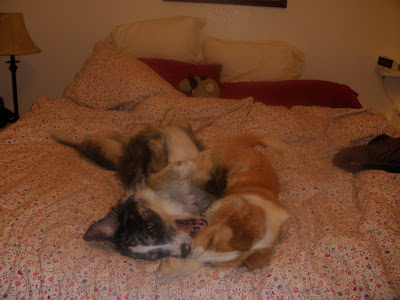 They are playing on my bed here, Maggie on the left and the new baby, Ginny on the right. 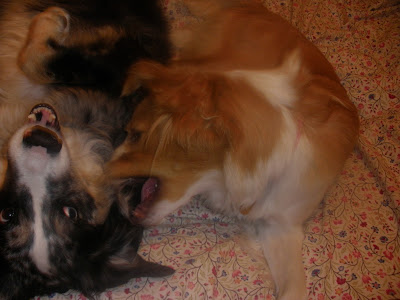 I think I gave Ginny the wrong name, I really should have called her Baby Jaws! =)
Posted by AggiePigeon at Monday, October 25, 2010 7 comments:

I may drink alone but I'm no LUSH!

Today I have for you my honest  opinions on some Lush things that I have purchased from their website.

My personal favorite is Honey I Washed the Kids soap, I think I already raved about this stuff so here is just another spam pic. of it. 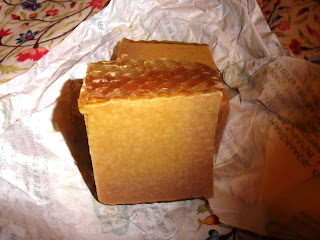 This stuff is really just the best, it lathers, it smells great and makes my skin smile at me!


And some other Random bits of bath products...

How about you?
Any great products that you have tried lately and are loving or hating?
Posted by AggiePigeon at Thursday, October 21, 2010 5 comments:

A little of what you fancy does you good.

Here is two more polishes I won from polish of the day.ish. 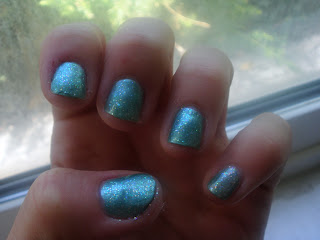 Here I added some glitter, Pure Ice, some other stupid name, I'm sure...too lazy to get up and go look at it, but it made my day. 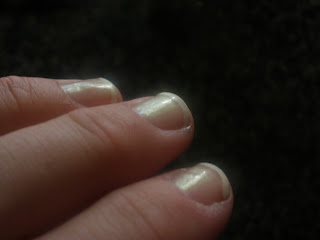 This was the only good pic I could get of this one, this is two coats of Sally Hansen Star Opal Nail Glaze used as a french manicure base, this is like a 'clear' duochrome of pink and green, very very pretty!


So what is with that title anyways...?

A euphemistic way of expressing the benefit of sexuality.

This proverbial saying was first the title of a vaudeville song, made famous by the risqué Victorian singer Marie Lloyd. Lloyd was an immensely popular music hall performer in England towards the end of Queen Victoria's reign and into the early 20th century, much to the chagrin of the moralists of the day, who did everything they could to prevent her from performing. This included having her refused entry to the USA in 1913 for "moral turpitude".
The songs she made popular were apparently fairly harmless but she managed to deliver even chaste material with a certain lewdness. The style she adopted was of a winking familiarity with the audience, all of who of course were happy to play along with every double entendre.
The chorus of "A Little of What You Fancy Does You Good", goes:

I always hold in having it if you fancy it
If you fancy it that’s understood
And suppose it makes you fat? I don’t worry over that
‘Cos a little of what you fancy does you good.

No one present at performances imagined that Lloyd was singing about cream cakes, although the line has in fact been used to advertise them in recent years. The sexual innuendo that was ever-present in the music hall has now largely been forgotten.
Marie Lloyd has been a continuing influence on British variety and comedy acts, being the template for artists like Max Miller and inspiration for the saucy euphemism of the Carry On film series. It is clear that Mae West ("I'm the kinda girl who works for Paramount by day, and Fox all night") also took inspiration from Lloyd's ("I sits amongst the cabbages and peas") manner of stage patter.
-from The Phrase Finder
I like me a good proverb and I've been told that I'm more of a folk-lurist than a soil scientist...at heart at least, the dirt under my fingernails tell a different story!
Posted by AggiePigeon at Wednesday, October 20, 2010 4 comments:

Dazzle you with Diamonds!

Hello all, I am so pleased to be alive today! I have been struggling with some pretty major life-altering things that I don't really want to get into so needless to say I am surviving day by day and am just really enjoying my nail polish!

Here is the first polish that I won that I was just totally excited to wear...OPI DS Diamond!

Although these pictures can't do the polish justice I assure you that this is totally work appropriate and just amazing in the sun. =)

On a slightly different note...I ate a cold cheese sandwich for dinner last night, not grilled, no sauces, just bread and cheese
Posted by AggiePigeon at Monday, October 18, 2010 10 comments:

So, I won a giveaway from Polish of the Day. ish.!!! Karen is amazing, really. I was following her well before her giveaway, and I never miss her blog, I may not comment as often as I'd like but I do look at it everyday/evertime she posts. She has really awesome pics of her nails (which are painted perfectly!) You should all check out this post on what her husband did with her nail polish, too cute.

Anyhow, this is what I won. 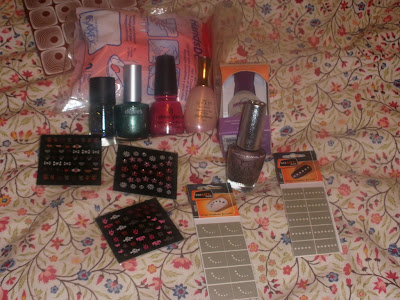 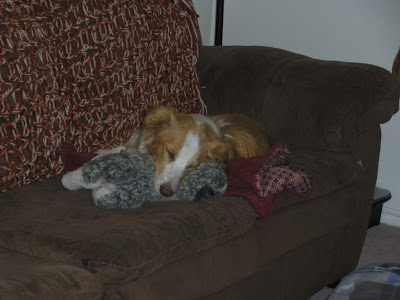 And this is the little angel sleeping on the couch using a toy as a pillow, such a sweet baby!

Thanks for reading and thank you so much, Karen!

AggiePigeon
Thanks for taking time out of your day to come by and read about my little world of polishing nails, having pets and graduate school. I put the wrong names to nail polishes frequently and I don't use the right 'lingo' and I don't care but otherwise I would love to share my polished nails with you. =)